Last Saturday night, White Night took over the city of Melbourne, filling every street and laneway with light, sound and movement. I set out to discover Alinta Krauth’s work Colonise in the heritage listed Scots Church.

It was a relief to escape the hot summer’s night and enter the cool sandstone confines of the church. Inside the dimly lit interior, Krauth’s bat-winged shapes spread across the aisles, hovering off poles suspended over wooden pews. Reassembled on site the ‘bats’ were constructed by Krauth from recycled foam core and paper. The shapes created by the crisp outline of the wings echoed the church’s vaulted ceiling panels and were lit in hues of red and blue like that of the stained glass windows.

Krauth used 360° projection mapping to illuminate each side of the work. The projected images comprised of a montage of mosaic patterns with snatches of the sky, trees and overlays of text. Although it was difficult to decipher Krauth described the text as grabs of commentary referring to the often uneasy relationship between people and bats in urban areas.

Krauth’s art practice is concerned with environmental issues; Colonise highlights the problem of deteriorating natural habitats that are increasingly under pressure from urban development. The site of this work at Scot’s Church offered up a symbolic place of refuge for the colony of Flying Foxes, and also alluded to broader notions of pastoral care.

The concept of refuge was emphasized by the strikingly sparse audio work composed by Krauth, inspired by the music of John Cage. Krauth developed the composition for Colonise using rivers as maps for the audio. The meanders and bends of the rivers were used to generate sound, in a process linking nature, art, music and technology.

As I stepped out of the church back to the hustle and bustle of White Night, Colonise had offered a moment of quite reflection amongst the swirling city lights. 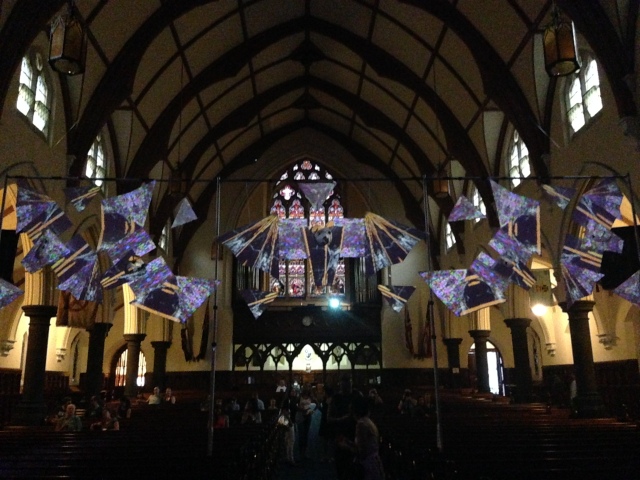