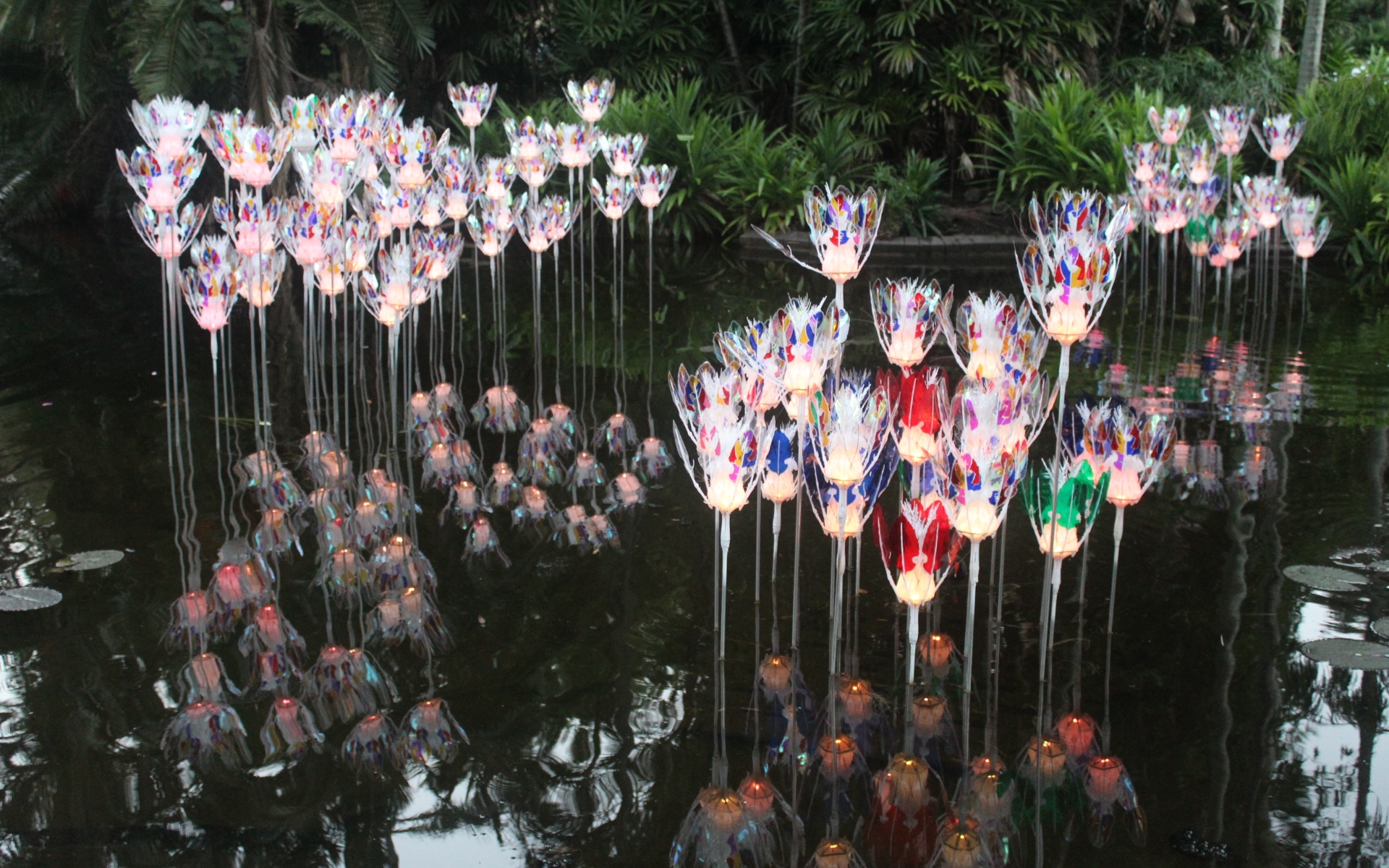 On Friday evening, I found myself wandering around the city fringes into the lush green parklands of the City Botanic Gardens to experience Botanica. With the promise of illuminated artworks, foodtrucks, live music and giant roving puppets my evening plans were underway.

On arrival, the park was buzzing with visitors, and keen to find out more I joined the guided tour. The tour took us on an exploratory journey through the gardens to learn more about the artists and their works. The program brought together 16 artists from around Australia with diverse works on display in the gardens for Festival 2018, part of the Commonwealth Games cultural celebrations.

It was interesting to find out that many of the artists did not actually define themselves as ‘artists’. Rather, they had come to art from other disciplines such as science and architecture. This blurring of boundaries seems to fit with the evolving nature of our society, Tony Dunne, Head of Interaction Design at The Royal College of Art says: “New hybrids of design are emerging. People don’t fit into neat categories, they’re a mixture of artists, engineers, designers, thinkers.”1

One such ‘artist’ is David Harris, he is from a science research and journalistic background and now works primarily with light and sound installations. His work, Waving Back uses motion sensors and temporarily grafted branches to allow the tree to interact with us – by playfully waving back.

Hairy Eyrie, a small mysterious structure created from palm fronds is the work of architect and artist Zania Wright. Zania feels strongly about using locally sourced materials to generate a sense of place and belonging and she worked alongside the Botanical gardens staff to source the materials for her construction. 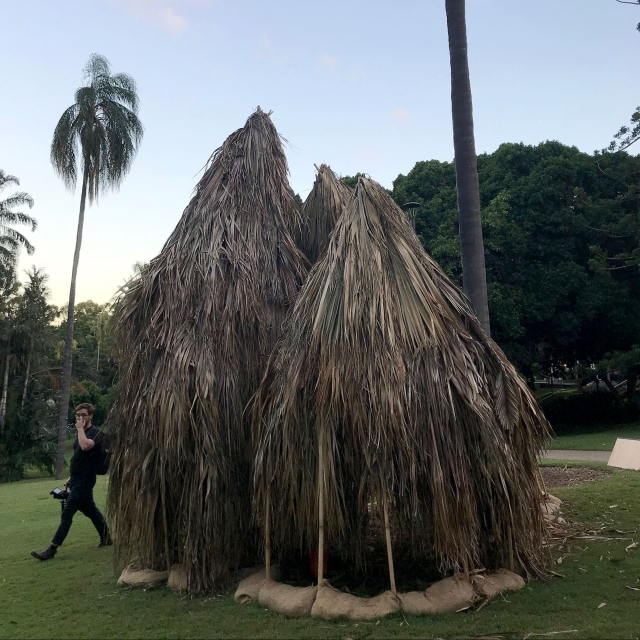 Many of the pieces invited us to put aside notions of ‘look but don’t touch’ to instead participate and play. One of my favourite works was Flourish.of.Tents by public artist Georgina Humphries, a soft sculpture hand-created from discarded festival tents! Children romped, played, and rolled on the picnic blankets and play shapes while gazing up at the brightly coloured ‘flags’ fluttering above. 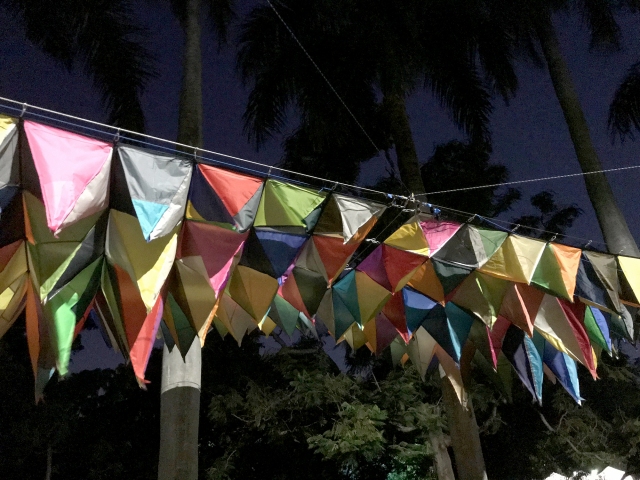 Next to the parks lily ponds paper-cut artist Pamela See invited us to become co-creators of her work by crafting lilies our of paper. These lilies were then scattered on the lawn to make a flower-filled ‘common’ adding our contribution to the work Common Wealth. 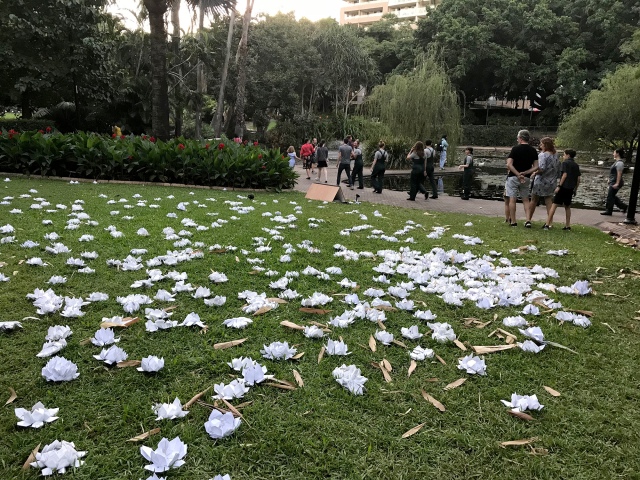 Reflecting in the pond waters Bastions of Light by Skunk Control tempted us to imagine where these other-worldly flowers might have come from. What new stories could be created as the flowers stored their (solar) energy during the day to softly emitted it at night? The eel and the moorhen swimming past seemed to have already accepted these new visitors as part of the pond. 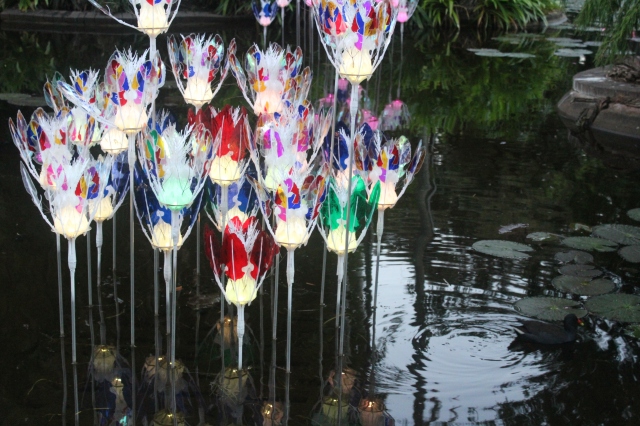 These site-specific works used vastly different approaches to working with the environment. Mona Ryder and Kerrie Poliness grew directly into the garden choosing their medium of grass and flowers. The whims of nature meant that the flowers had to be replaced due to heat damage, and the grass continued to grow despite the clean lines of Field Drawing #1. Projection artist Craig Walsh used light to simply hover upon his chosen site – a magnificent fig tree. Josh Wilkinson and collective Unqualified Design Studios work Star Landing is a playful sci-fi projection onto Morning Star a permanent sculpture in the park. 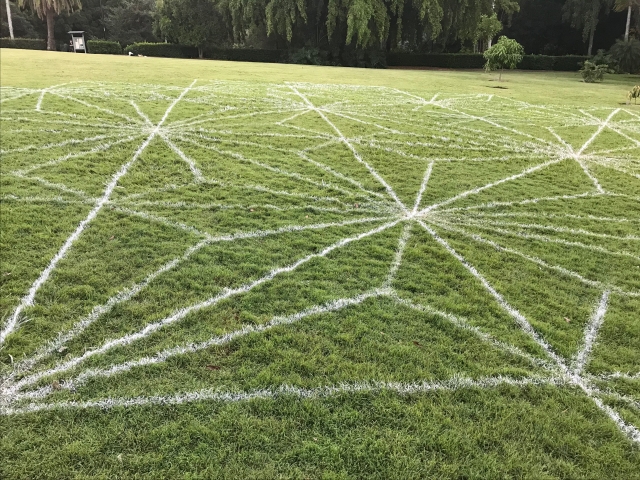 Other works highlighted the City Botanic Gardens historical significance as one of Brisbane’s first location for farming, plant collection, and leisure. Priscilla Bracks and Gavin Sade, Trophy Specimen is a work of hybrid creatures alluding to the past history of this site as a Zoo. Natalie Billings app Unearthed is a map-based journey which uncovered some of the gardens hidden history. 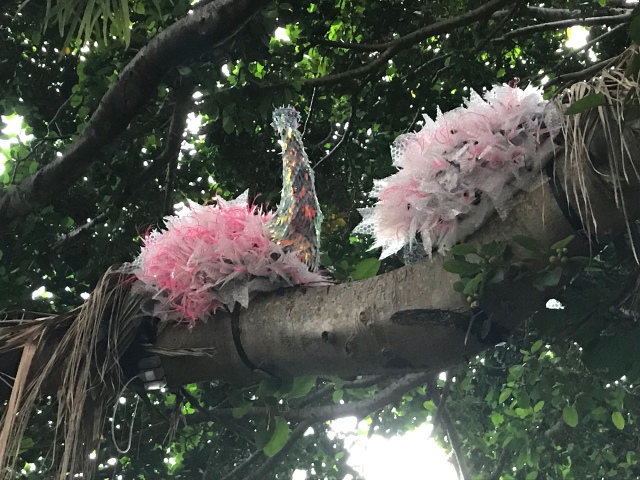 It is heartening to see this exhibition take place in Brisbane which has not had a significant outdoor temporary art offering on the cultural calendar. Botanica invites us to wander through the park and discover new conversations between art and nature. With the site as a catalyst for ideas and experimentation this ephemeral program successfully blurred the boundaries. 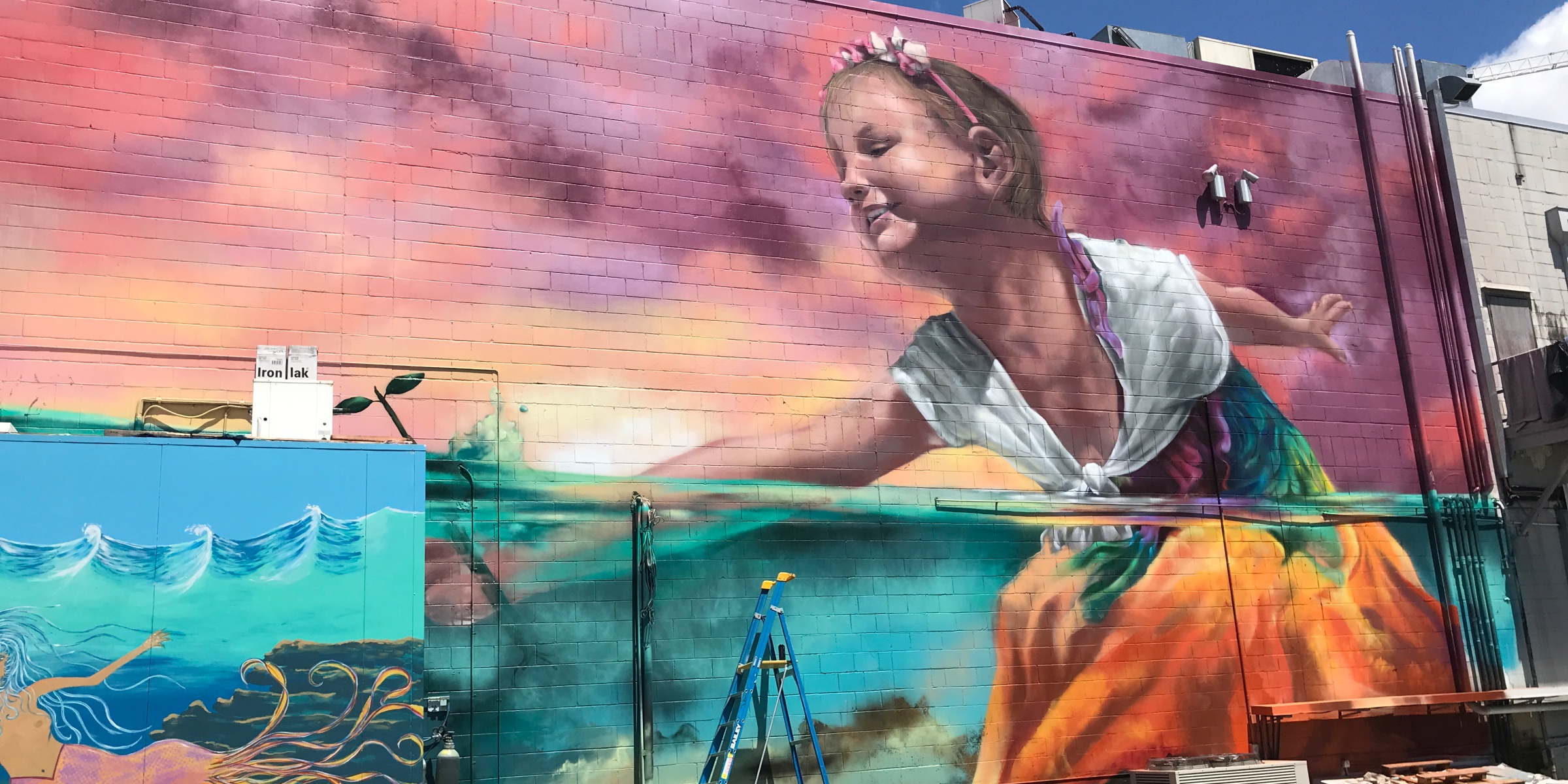 What does community mean to you? Is it your local neighbourhood, a group of like-minded friends, or maybe even your social media followers?

Jenna Williams and Ihab Imam are helping to define how we interact with public space and are inviting everyone to join in!

The West End Street Art Festival (WESAF) has brought together a diverse group of creatives, with the goal of adding to the lively mix that is Brisbane’s West End. The festival extends to street art sites along Boundary Street and Russell Streets, and the mural works will remain after the festival is over, becoming part of the local fabric.

The festival’s aims are ambitious, they want to support local artists and businesses, all the while raising funds for Orange Sky Laundry. Orange Sky Laundry is a charity that helps homeless youths by providing a free clothes washing service.

The festival wraps up on Sunday 22 October 2017, we hope that WESAF will be back with more community action next year! 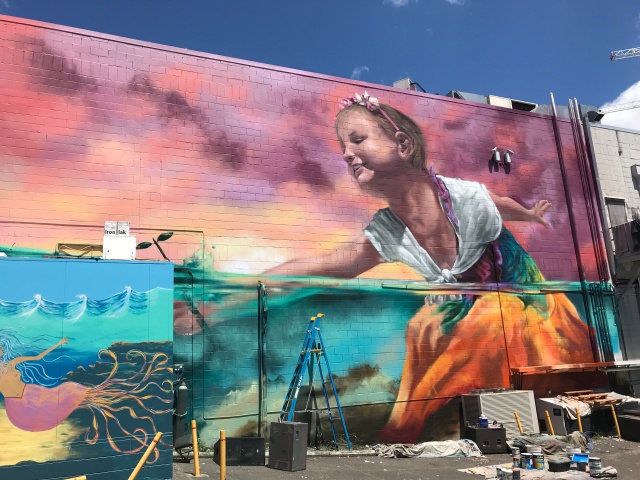 Brightsiders awesome wall in progress at the festival. 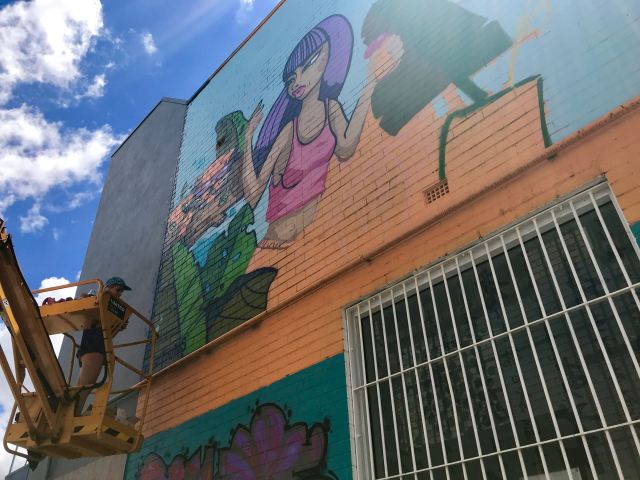 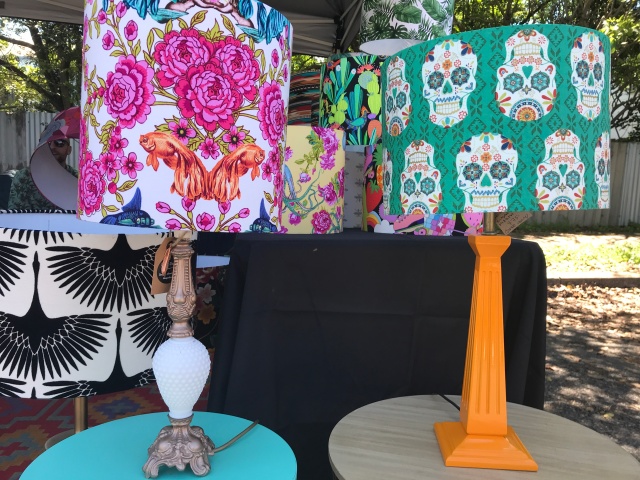 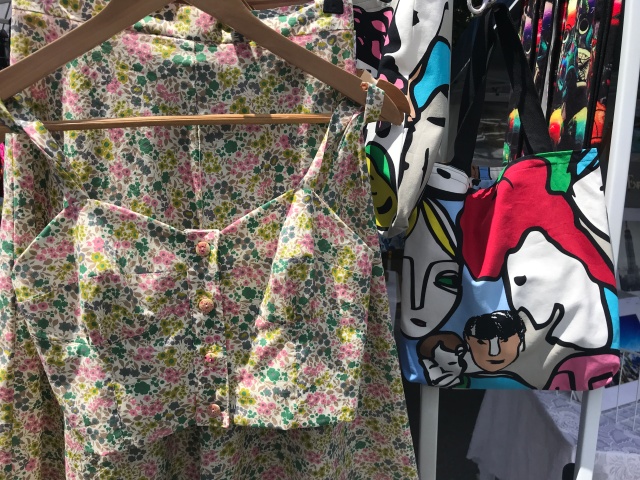 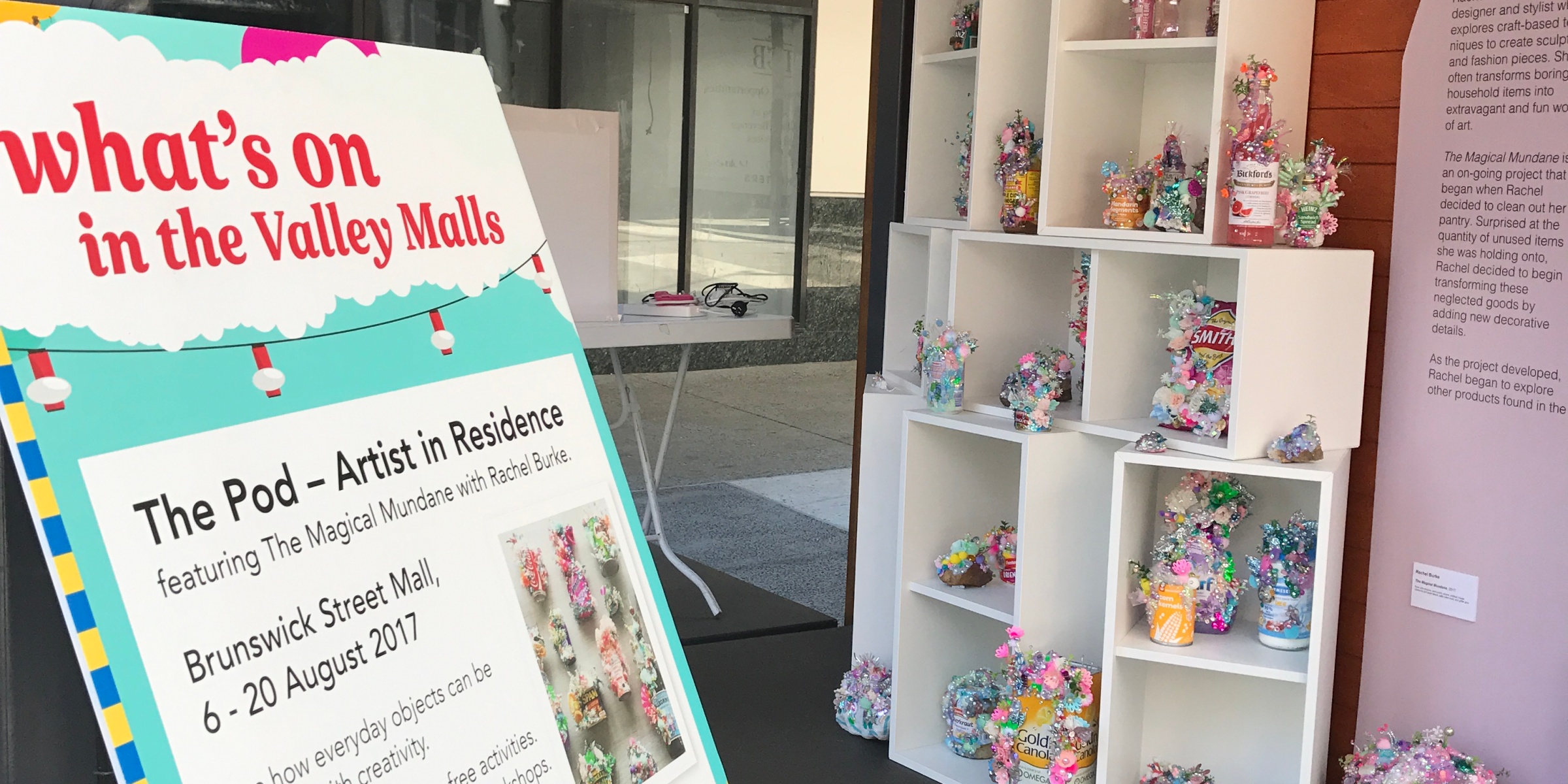 During August 2017 Engage Arts collaborated with the fabulous artist, designer and stylist Rachel Burke to bedazzle The Pod in Brunswick St Mall with her on-going craft project, The Magical Mundane.

Armed with sequins, jewels and glitter, The Magical Mundane for Brisbane City Council’s artist-in-residence at The Pod brought together an exhibition and diverse workshops and events that invited participants to join Rachel in turning mundane household objects into glittering works of art. 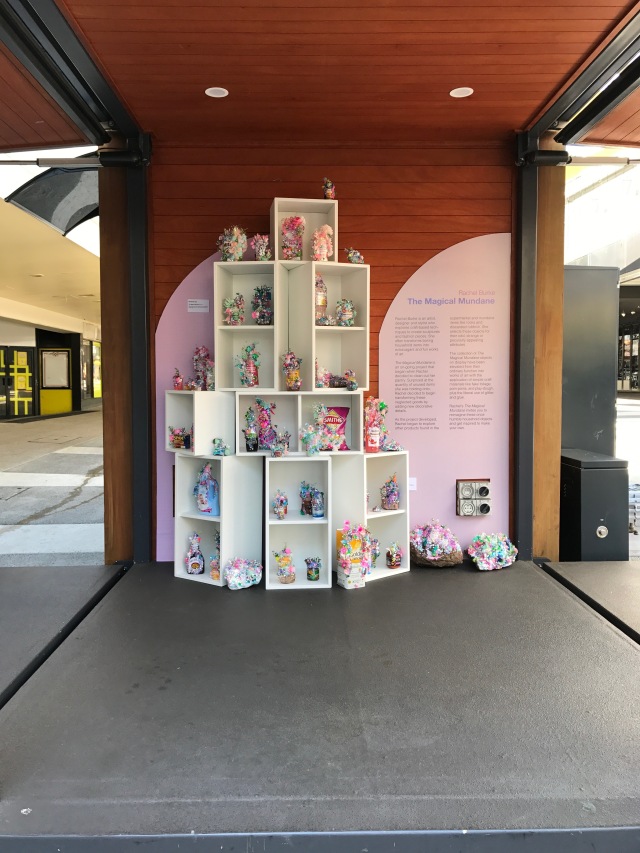 On a sunny Sunday afternoon, around 40 visitors enjoyed taking snaps of the exhibition while chatting to Rachel as we celebrated the launch of The Magical Mundane exhibition in style with brownies and cherry lemonade from local baker I Heart Brownies. 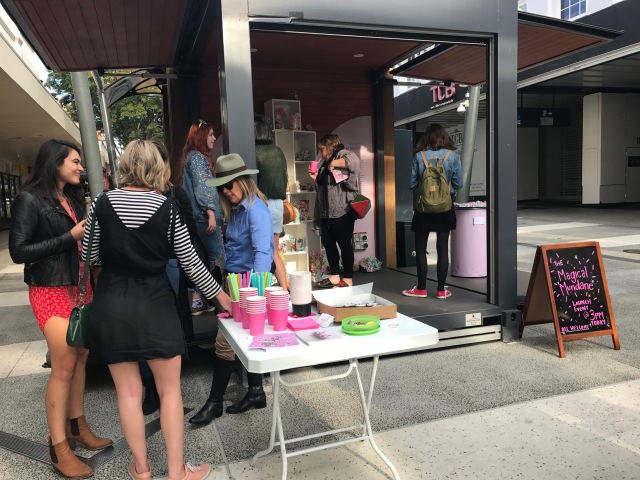 The Pod program was inspired by the Royal Queensland Show (Ekka) in Brisbane where the annual Ekka competitions display the ‘best in show’ of handmade products including crafts creations. The program invited visitors to get creative in a series of free art and craft workshops and drop-in activities inspired by Rachel’s on-going craft project The Magical Mundane.

Hosted by Kerry from Engage Arts, the Magical Mundane drop-in activities let participants choose from an array of dreary household items and use craft-based techniques to transform their selected item into their own Magical Mundane artwork. Participants worked with a range of colourful materials such as pom-poms, glitter and sequins to design and decorate their object. Engage Arts also designed drop-in activities for children by inviting them to decorate simpler objects such as small rocks and paper plates. 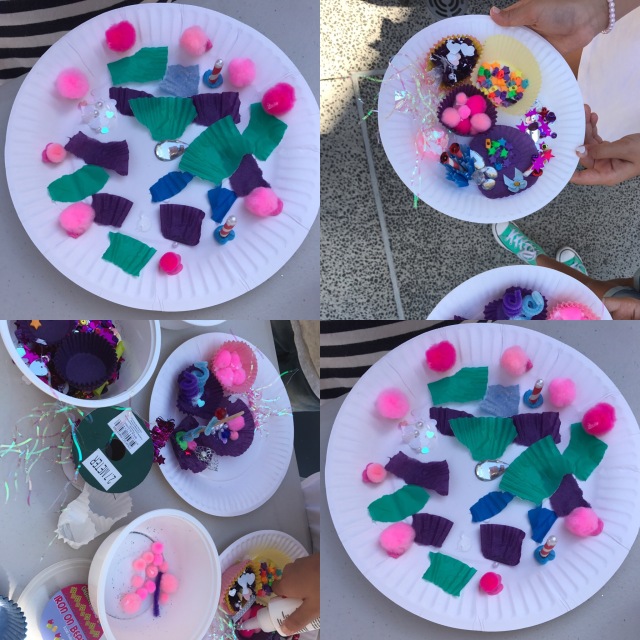 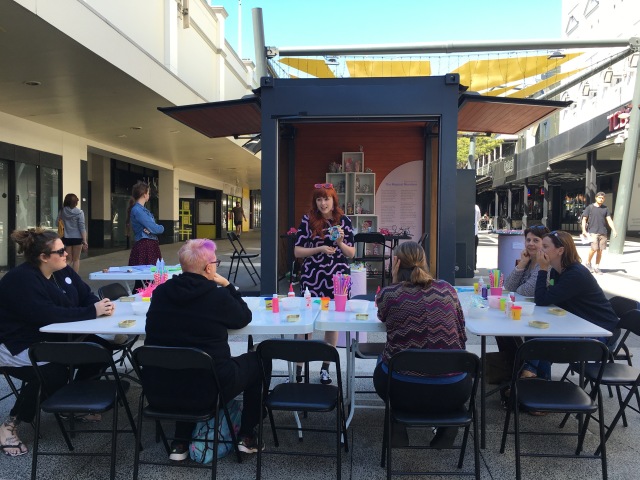 Rachel teaching participants in the Make Your Own Sardine Diorama 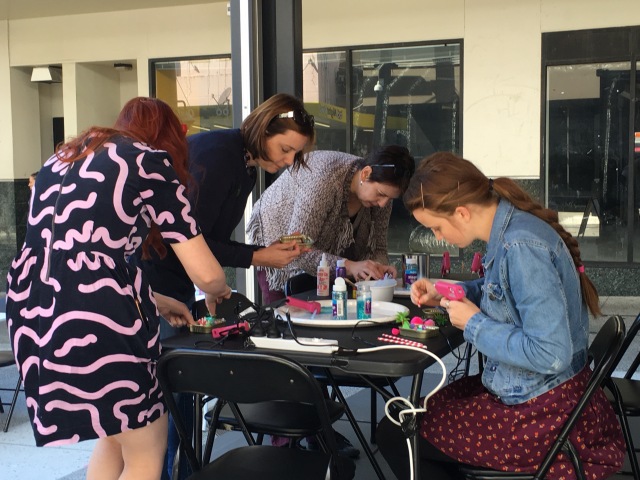 Participants getting crafty in Rachel’s workshop

On the final weekend of The Magical Mundane residency we presented a day of creativity and idea sharing. We began the day with a Sardine Diorama workshop facilitated by Rachel. Under the guidance of Rachel, participants created a fantastical landscape in a used sardine can. By all accounts these fully-booked workshops were a lot of fun and a great chance to learn how to apply Rachel’s craft techniques. 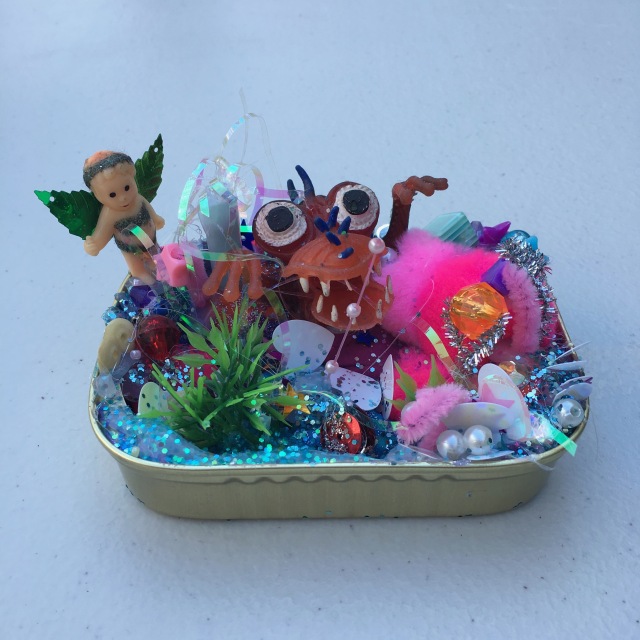 A wonderful creation made by participant Jen in Rachel’s workshop. 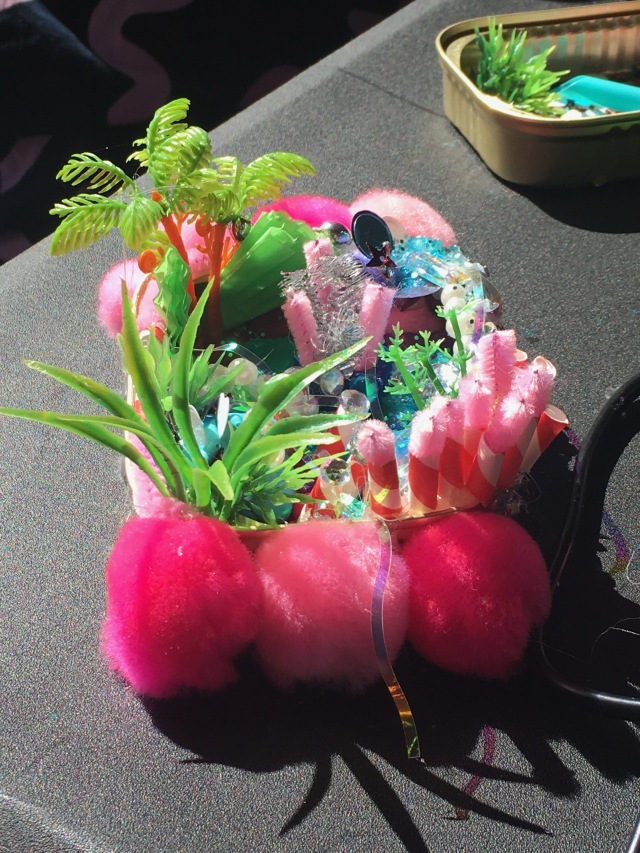 A glittery tropical landscape made during Rachel’s exhibition

The workshop was followed by a Q&A session with Rachel Burke as Kerry and Danielle of Engage Arts discussed Rachel’s Magical Mundane project, her inspirations, and life as an artist and designer. The live Q&A was delivered in front of an audience and recorded for all to enjoy. You can listen to the Q&A on the Engage Arts Soundcloud. 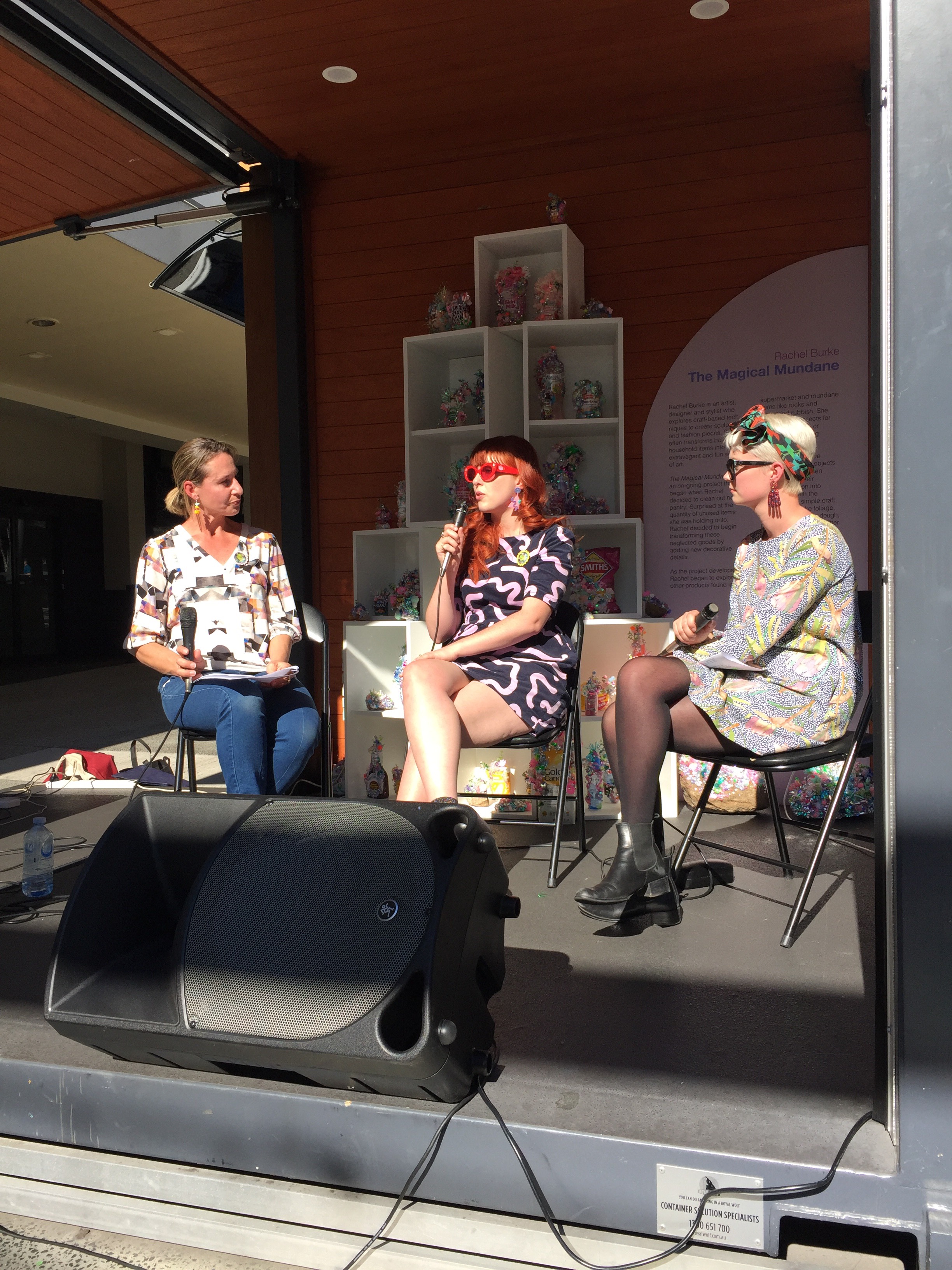 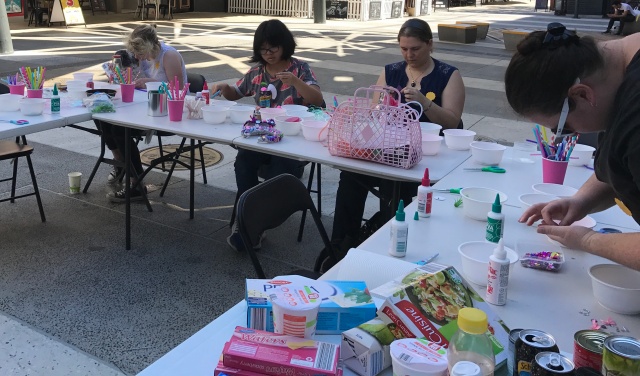 Participants bedazzling away at the Magical Mundane workshop

During the residency, we ran a Magical Mundane Instagram competition asking people to share their Magical Mundane creations on Instagram using the hashtag #themagicalmundane. We had excellent engagement with the program online with over 700 likes across the Engage Arts Instagram posts. Rachel picked Instagrammer Sarah Duff’s wonderful transformation of an old multivitamin container into a sparkling Magical Mundane artwork to be awarded ‘best in show’, and Sarah received one of Rachel’s original handmade cupcake crowns. 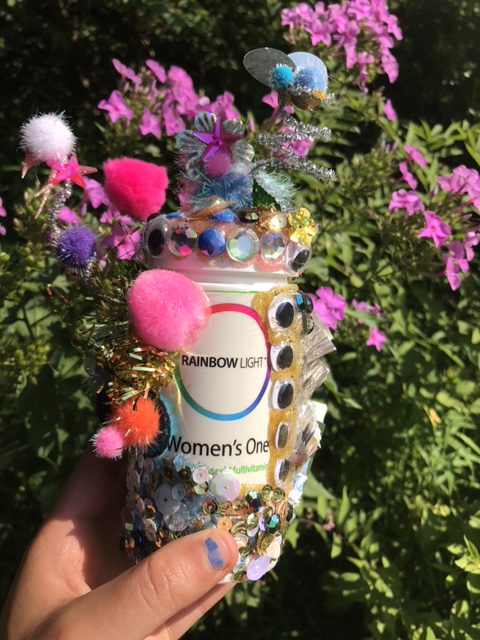 A diverse range of participants of all ages, from toddlers to retirees, enjoyed the Magical Mundane exhibition, workshops and drop-in activities. The pop-up exhibition also drew people into the Mall with its sparkly works enlivening The Pod space. During the program, the Engage Arts team got to know several participants with a number of people attending more than one of the events.

Promotion of the program was picked up on The Weekend Edition, BNE Art and across other ‘what’s-on’ event pages. Brisbane City Council generously supported the marketing of the program through social media promotion and printed posters.

We hope that Rachel’s Magical Mundane residency successfully inspired people to discover more about Rachel’s whimsical works, and get creative by turning unwanted and used household items into their own works of art! 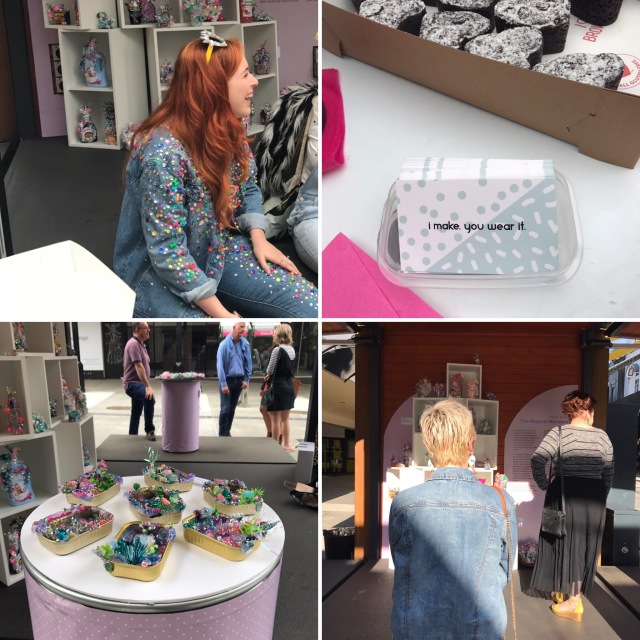